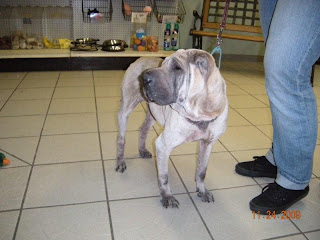 So…. I did a video of Lola, the sharpei that was living at the shelter after her pups were taken away from her. She was on the short list to start. Then she had an incident and “bit someone on the face.” And, for this, she was set to be killed. I could not let that happen for several reasons, the main one being, dogs don’t generally bite people on the face out of aggression, they do it out of stupidity. The stupidity is on the humans side. If someone puts their face near a dogs mouth, and doesn’t know the dog, the probably deserve to be bit. DO NOT kiss strange dogs. It is so typical of people humanizing dogs and wanting to kiss them because that is what they think the dog wants. The dog does not want to kiss you no matter how cute you think you might be.

So anyway, Lola gets on the “super short list” and is do to be killed. There was no one who was gonna step up for this little girl. So I knew we had a fight in front of us. Sue and Jody from Pei People are really champs and care about the Pei around here. Bear in mind that these two women are the only Pei rescue between Mexico and Northern California. Most of the time rescuing a dog comes down to money and not will. Well, I bent Sue’s ear quite a bit and leaned on Jody to take Lola. They acquiesced after I did the last video as it drew some serious attention to Lola and many of you generous people donated to save her life, especially Patricia.

Thanks to all of you for stepping up, now lets get the word out there and get her a home and get PeiPeople.com some well deserved donations.