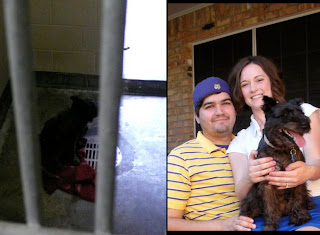 It was almost two years ago that I wandered into the shelter in downtown LA and found a small, black dog sitting all alone in the middle of a kennel. This dog intrigued me and I could not figure out why. I studied the dog and upon closer examination found out she was blind. A seven year old BLIND dog, dumped at the shelter… I was furious.

Joey would be one of my first rescues and one of my most memorable videos, check out her video:
http://www.youtube.com/watch?v=zpQJ99ECGLg

I sent Joey off to a great rescue in New Orleans, Gypsy’s Eye Blind Dog Rescue. Michelle was an angel. We worked out the details and I flew Joey to her rescue a few days later. We kept in touch a bit, and I knew that Joey had found her home, but that was about it.

Then, just the other day, I received a message on facebook from Joey’s new family. I got all choked up (of course)… and I want to share a little of the story with you here…

Hey Robert, I got your youtube message, but it thinks it’s easier to send pics in a facebook message. Here’s what my wife, Erin, wrote about Joey:

Cade had grown up with schnauzers and wanted to get one, but I was a cat person and thought a dog would be too much work. But I do love animals, and I’m big into animal rights. I gradually warmed up to the idea of a dog, but insisted that we rescue one, not buy one from a breeder. Cade began looking online and came across Joey, a partially blind schnauzer who had been sent to Louisiana from a shelter in California. We met with Michelle, who runs Gypsy’s Eye Blind Dog Rescue, and took Joey for a short visit. She was very wary at first but quickly got used to us. We grew to love her and decided to adopt her officially. Now she follows me around the house and growls at anyone who comes near me, including Cade! I still love my cat, but I am definitely a dog person now, too.

We groom her ourselves … well, we try to. She won’t let us get the clippers anywhere near her head. So she has a giant, fluffy head until we get her to Petsmart or someplace for some expert grooming.

And the attached picture is me and my wife at a dog birthday party with Joey.