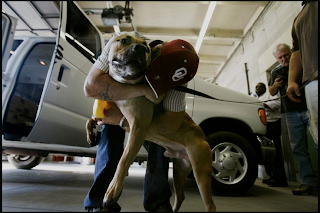 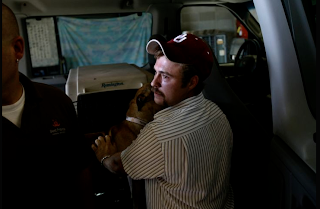 I’m writing this as post as a professional.  Please understand that I train and rehabilitate dogs with aggression, dominance and behavioral issues all the time.  It is what I love to do and I can say that I understand dogs.  I’ve walked the walk and talk the talk.  I’ve rehabbed dogs the other trainers give up on or won’t even touch.  I understand aggression and I can tell you some can, and some can’t be fixed.  However, and this is the big point, AGGRESSION is not based on a breed.
There are so many laws on the books that are an absolute waste of time.  Insurance companies who won’t insure people who own certain breeds of dogs.  Territories in our great land where certain breeds of dogs are ILLEGAL….  thats right, certain breeds are illegal in certain areas.
My case in point would follow the last post in which I talked about the city of Denver Colorado that has a ban on Pit Bulls.  Not pit bulls who have bitten someone, ALL PIT BULLS.  That means if you are a pit bull, or if they think you are, you get rounded up and killed.  Does that remind you of something that happened in Germany in the late 1930’s or early 1940’s.  Don’t hand me the crap of “we should not judge humans and animals in the same way.”  WHY NOT.  Animals are animals and if we make or support laws like this, we are actually lower on the chain of evolution than those we persecute.
There are 5 MILLION animals killed in our shelters each year.  Lets add to that number a few more because we enact a law to BAN specific breeds.
If you want to ban dogs that are aggressive, ban dogs that get in fights or those that  attack people.  But remember, its the human owners that are responsible.  There has never been an attack by a dog that was kept on a leash, trained properly or one kept in a locked up yard.  Why do we attack the dog that can not defend itself.  It is idiotic to make such a law and an absolute waste of time and money to have it on the books.
So now that pit-bulls are banned, Denver claims that pit-bull attacks are down.  So what does that mean?  Are poodle attacks up?  Should we ban Chihuahua’s now?  Where will the insanity end?  Why not spend these resources (creating and enforcing laws costs millions) on investigating animal abuse, cruelty, dog fighting, etc.?  Why not promote responsible pet ownership instead of becoming a society of murderers?
Can someone honestly say that one breed is more likely to attack than another, or should it be that the type of people who own a specific breed all fall into a category?  Are all people of a specific race similar to each other?  Are all people of a specific religious belief similar to one another?  Racism, sexism are wrong just like labeling a specific breed of dog.  I believe the cities that enforce BSL (breed specific legislation) are so ridiculous that its barely worth my time.  I am writing only because I was asked to do so by a good friend who is quite upset about this.  If you believe this can’t happen to your city, think again.  Laws are passed sometimes before you know.  I urge you to fight for the rights of those that can’t.
Just because The Denver Forest situation is over, its really not.  This dog did nothing wrong.  The dog was ripped away from his owner, his guardian.  He is being shipped off to another place and another person.  The dog is not aware of why?  The person knows, the animal is confused.  If the dog now develops behavioral problems because of this, perhaps he may bite someone, but then we could clearly blame the city that caused it.  Couldn’t we.  Restructuring pack order is something quite intense on the mind and spirit of the dog.  Dogs that are fine in one pack, can become aggressive in another pack.  Did anyone think of that?  Probably not.  If the dog has never shown aggression with one person, can he change?  The answer is yes.  Would it not have been a more compassionate choice to allow the dogs owner the chance to move?  Considering he did not live in Denver, maybe he would have chosen to move completely out of such a backward area.
I have little respect for a government that could impose such legislation and hope you will share my opinion that it is only one step removed from something that could happen to you.
In closing I will say that I have encountered many aggressive dogs, yet each dogs aggression was NEVER based on a specific breed. It is a result of behavioral issues and pack structure.